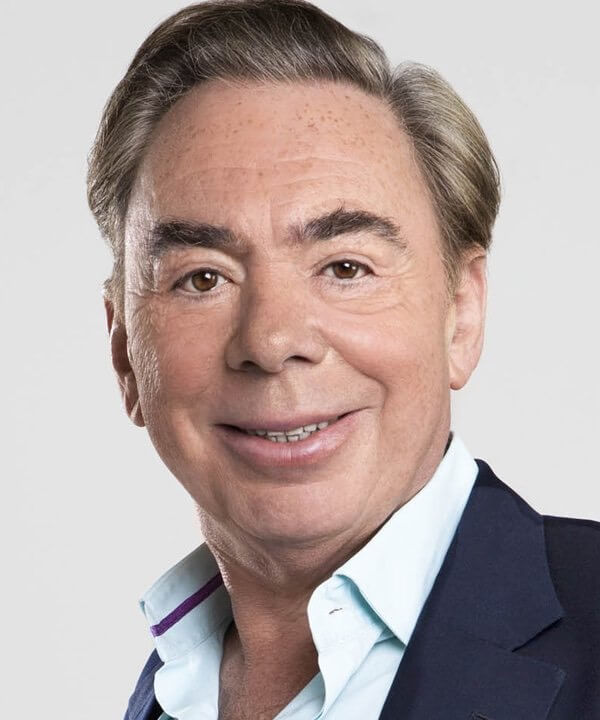 David launched David Grindrod Associates in 1998 and has been Andrew Lloyd Webber’s dedicated casting director on all Really Useful Group productions since then. As well as being our Vice President, David is a board member of Laine Theatre Arts, Watermill Theatre Newbury and the Council of Dance Education and Training, and he is a proud Associate Artist of the Old Vic Theatre.

Robert Powell is an English actor and voice actor, best known for the title roles in Mahler and Jesus of Nazareth, and for his portrayal of secret agent Richard Hannay in The Thirty Nine Steps and its subsequent spinoff television series.

Lyricist Don Black has achieved global success and many glittering prizes. He has worked with many of the world’s leading composers, including Andrew Lloyd Webber. They first joined forces to write the song cycle Tell Me on a Sunday, which developed to form the basis of the stage show Song and Dance. They were reunited again for Aspects of Love and their most recent production, Stephen Ward. He was inducted in the Songwriters Hall of Fame in 2008. He also received the Order of the British Empire in the Queen’s honours list.

Sir Matthew Bourne OBE is widely hailed as the UK’s most popular and successful choreographer and director. For over thirty years he has been creating and directing dance for musicals, theatre and film, as well as his own highly successful, award-winning companies. Matthew is the creator of the world’s longest running ballet production, and has been recognised with numerous international awards. He was knighted in the Queen’s New Year Honours 2016 list for services to dance, and awarded the Queen Elizabeth II Coronation Award – one of the most coveted honours in the world of dance – in recognition of his outstanding services to the art of ballet.

Anthony Cherry is a producer, writer and director at the BBC, and has been in charge of Friday Night Is Music Night for the last eight years. He became a producer in 1984 and has worked on numerous programmes, concerts, documentaries, dramas and series, both in radio and television. Notable amongst them is the award-winning Parkinson’s Sunday Supplement with Sir Michael Parkinson, which Anthony produced for 11 years.

Mike Dixon graduated from Trinity College of Music in 1979 and over the course of his varied career has established himself as one of the leading figures in the West End, television and radio as a Musical Supervisor, Musical Director, Conductor, Arranger and Composer. His work includes Aspects of Love, Dr Dolittle, Jesus Christ Superstar and We Will Rock You, and he has worked with icons such as Shirley Bassey and Lionel Richie.

Janie is an award-winning British actress, singer and musical theatre performer, characterised by her extraordinary versatility in acclaimed work on stage, film, television and radio. Janie won the three most prestigious awards in British theatre: the Olivier Award, the Evening Standard Award and Critics Circle Awards for Best Actress in a Play. She has also won the Olivier Award for Best Supporting Actress in a Musical for her performance as Carrie Pipperidge in Nicholas Hytner’s acclaimed production of Rodgers & Hammerstein’s Carousel at the National Theatre.

Matthew Dunster is an English theatre director, playwright and actor. He was the Associate Director of the Young Vic from 2005 to 2009, and the Associate Director of Shakespeare’s Globe from 2015 to 2017. His production of Love and Money by Dennis Kelly was nominated for the Olivier Award for Outstanding Achievement in an Affiliate Theatre in 2006, and his production of Mogadishu by Vivienne Franzmann was nominated for that same award in 2012. He was also nominated for Best Director at the 2016 Olivier Awards for Hangmen by Martin McDonagh.

Nigel Havers trained at ArtsEd and is one of Britain’s leading television actors. He has starred in many outstanding productions including Upstairs Downstairs, The Glittering Prizes, Pennies from Heaven, Don’t Wait Up and The Charmer.  Other recent appearances include The Sarah Jane Adventures for the BBC and two seasons of the hit US series Brothers & Sisters. He has recently completed a second series of the BBC comedy Lunch Monkeys and reprised his role of Lewis Archer in Coronation Street.

Robert’s career began on the stage and he has played major roles in the West End. However, most plaudits were won for Me and My Girl, which eventually took Robert to Broadway for a year, and for which he won Olivier, Fred Astaire and Tony Awards. On television, Robert starred alongside Zoë Wanamaker in My Family. Robert has also worked on five of the BBC’s Shakespeare adaptations. He’s also played Tony Blair twice on the small screen, in A Very Social Secretary and The Trial of Tony Blair.

Lesley Manville is a multi-award-winning stage, screen and television actress. In the theatre, she has been seen in Ibsen’s Ghosts at the Almeida Theatre, West End and New York, for which she won both an Olivier Award and the Critics Circle Best Actress Award. She recently appeared in Harlots, an eight-part US/UK series. Lesley was made an OBE in the 2015 Queen’s Birthday Honours List.

From 1968 to 1986, Trevor Nunn was the youngest ever Artistic Director of the Royal Shakespeare Company, directing over thirty productions, including the West End’s longest-running musical Les Misérables. He has also directed the legendary musical CATS, working with Lord Andrew Lloyd Webber and Dame Gillian Lynne. From 1997 to 2003, he was Director of the National Theatre, where his productions included Troilus & Cressida, Oklahoma!, The Merchant of Venice, Summerfolk, My Fair Lady, The Coast of Utopia, A Streetcar Named Desire, Anything Goes and Love’s Labour’s Lost.

Michael Attenborough was educated at Westminster School and Sussex University. In 1990, he was appointed Resident Director and Executive Producer of the Royal Shakespeare Company. In 2002, he was appointed Artistic Director of the Almeida Theatre. Under Michael’s leadership as Artistic Director, the Almeida produced twenty eight premieres, ten new versions of foreign plays, ten new plays for young people and four major festivals. In June 2013, he was awarded the CBE for services to theatre, and in November 2016, Michael was appointed to the honorary post of Director Emeritus at RADA.